How do power showers work?

We all love to take a shower. As well as the necessity of keeping clean, it helps us relax after a long day, it reinvigorates us for the day ahead, it helps recharge our batteries and gives us a place to think, ponder and wonder about life. Whatever you use your shower for, you need to be happy it’s delivering maximum performance and that’s why many people are choosing power showers over the other varieties that are available. 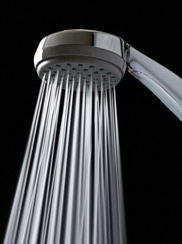 How do power showers work? And what separates them from the other types of shower available?

Although the Greek and Roman Empires used early forms of showers, they were rarely seen in homes until the 20th Century. In the UK, they rapidly grew in popularity during the 1960s, around the time the electric shower was hitting the market and were seen a very useful time-saving way of getting clean, compared to having a bath. Over time, showers became more sophisticated, with additional features and selling points, and it was around the 1980s that the power shower became an increasingly common choice for many homes.

Most conventional electric showers work by running an electrical current through an element, which heats the water that passes through, resulting in hot water coming through the shower head. However, water pressure can sometimes be an issue, particularly at high temperatures. It can also be affected by taps running in other parts of the house, resulting in an unsatisfactory amount of water, which makes it harder to get clean and make it sometimes feel like you are standing under a watering can, rather than a shower.

Power showers overcome this problem by having their own pump. This increases the pressure of the water, meaning it flows through the shower head with much greater force and allows a constant flow at all times. This gives you a very different shower experience compared to a conventional electric shower. The powerful flow of water gets rid of dirt much quicker and provides a relaxing, massage effect, which can help soothe aching muscles.

Whilst a power shower does use more water than a conventional electric shower, it also shortens the average time taken, evening out the costs involved. In addition, certain models allow you to adjust the flow rate, so you can use less water if you want to, as well as different shower heads, which alter the configuration of the water’s flow. Advances in technology have helped modernise the shower, with all manner of futuristic features included now, such as LED lighting and built-in radio - perfect for those who like to sing in the shower.

There’s no doubt the power shower revolutionised the way we keep ourselves clean. Whilst it remains an important part of everyday life, it has become something to look forward to, a place to wash away worries, if only for a few minutes.

The Shower Doctor offers a wide range of showers, pumps and accessories and with over 20 years’ experience, we are also able to offer expert advice on all shower-related issues and questions. You can follow us on Facebook and Twitter, or email us with your shower queries and comments.