Shower Doctor shows how to use content to drive traffic

Over the Christmas holiday I had to deal with a leaking shower (I know, what a wild and exciting life I lead). A few years ago, it would have been the simple job of replacing a spent washer, but of course these days showers are much more sophisticated. After I'd taken a bit of the shower apart I realised that it wasn't going to be a simple task and I was going to have to replace some piece of the internal workings. Given that I'd inherited the shower, and had no idea what kind of part would be required, I asked the internet for guidance. 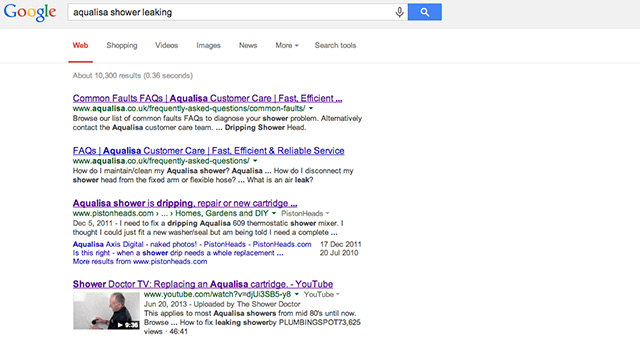 First thing I clicked on was Aqualisa's own site — "Common Faults FAQ" page — the first listing. The resulting information was not particularly useful to me, except it confirmed that my shower probably had a fault:

"Our showers have been designed to discharge residual water for a short period of time after use to reduce risk of limescale build-up. If the shower is failing to shut off the water, however, and is constantly dripping day and night, then there could be a fault with the shower."

The fourth listing was a video — "Shower Doctor TV: Replacing an Aqualisa cartridge". Now, I guess I must be inherently lazy, but I'll nearly always go for a video rather than a long written explanation — particularly for something that requires taking things apart, putting them together, or going through a sequence of actions (e.g. repairing a laptop, maintaining my bicycle, using software).

This time was no different. I immediately clicked the video link and watched a very informative, clear and comprehensible demonstration of how to remove and replace the shower cartridge.

The next question I had was where to get the cartridge from — I clicked the Shower Doctor website link from the YouTube channel, and was presented with a well-organised website that resulted in me making only three clicks before I was on the page for the cartridge I needed. On that page too was the video explaining how to replace the cartridge. (The company has 88 videos on its YouTube channel.)

Whilst I was there, I had a little look around the site and was impressed by the quantity of clear, easily digestible information available.

On the page featured below, for example, a diagram shows the entire construction of an Aqualisa shower and bath combination tap unit in an exploded form, making it clear how all the bits fit together, and the terminology used for each element — extremely useful for those of us with little plumbing knowledge. 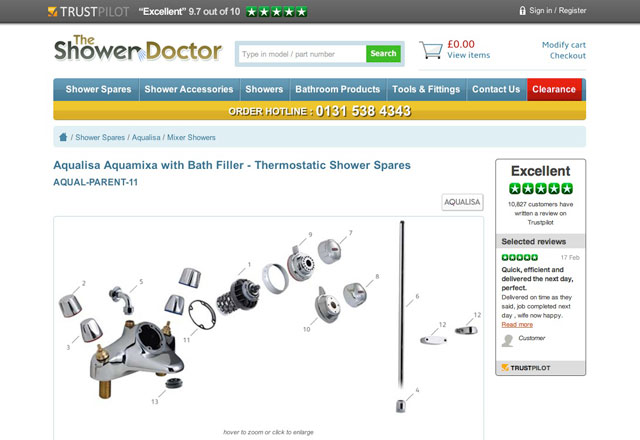 Below, each item is numbered so it is easy to find on the diagram, and each can be clicked to go to the individual product page. Also, in the sidebar on the right, the company features testimonials from satisfied customers — social proof can be exceedingly powerful.

Aside from it clearly being well-planned, there are a few aspects of the Shower Doctor marketing strategy that I think are worth drawing attention to.

We've written about the effectiveness of video in the past, but it doesn't hurt to mention it again. The advantages are:

The Shower Doctor website is well-organised and easily navigated. An intuitive menu structure with clear, unambiguous labels makes finding what you're looking for a doddle. Cross-linking of related topics and products encourages browsing and aids the user journey.

The richly informative website, with plenty of videos, illustrations and photographs helps establish a sense of confidence in a potential buyer. Trust is a significant influence on any buying decision — do we trust that we're buying the right thing, and from the right person?

Being generous with information and assistance on a website suggests that the company will be equally helpful before and after purchase. Those feelings of trust are reinforced by the positive customer testimonials dotted around the site, and the TrustPilot band at the top featuring the company's "Excellent" 9.7 rating.

The company's brand is firmly established across each of the channels used — YouTube, Twitter, Facebook, Google+, and Pinterest. The company logo is even featured on the shirts that company representatives wear in videos. But, as we're always saying, a brand is not just a logo, and the brand here has as much to do with the in-depth information provided, and sense of trust engendered as the use of the company logo.

Clearly a lot of thought has gone into The Shower Doctor's use of content and social media. Blog posts and videos are promoted using Facebook, Twitter and Google+. Videos are also being used to drive traffic to the website, then embedded in pages to support product sales. Social networks share the content of others and are regularly updated. It also appears as if they are actively managed because thanks will be given for shares and retweets, and comments are made on the tweets and posts of followers.

The Shower Doctor is a great example of small business marketing done well. The company has made good use of the low-cost channels available to create a tonne of useful and informative content which is promoted effectively, and drawn together through a cohesive well thought out strategy. The result has been the creation of a strong brand that inspires confidence, and a lead funnel that drives traffic to the company website. I have no doubt that this strategy delivers a great return on investment.